All the time. Everywhere. We visited in winter so the blackouts are pretty regular during this season. A lot of the generators use the flow of rivers to create power and the rivers were freezing over where it was so cold.

2. Women Take Care of Their Appearance

Almost all of the women I saw- apart from those doing manual labour work- were dressed very nicely with make up and hair always done. This was especially evident in Pyongyang. It was extremely icy most of the days I was there but the women would still be wearing their heels and smart shoes that were completely inappropriate for the snowy conditions.

3. Everyone Dresses The Same

Men especially. I noticed that the guys must only have about 4 different coat designs to choose from- most were either dark green or black with a furry collar or hood. Shoes were usually a slightly clumpy, black, fairly smart but practical looking. Women seemed to have more choice in terms of colour and there would be the odd bright pink or orange coat but almost all of the styles we the same.

Such a unique and strange thing about the cities in North Korea is that there is NO advertising anywhere. Every city I’ve been to had billboards up for big brands and perhaps posters at bus/train stations. In fact, when you think about how much advertising there is everywhere you go in cities like London, Hong Kong, New York etc. it’s crazy ! But in North Korea there are only propaganda posters or murals dedicated to the leaders. (The featured image at the top of this blog is actually a propaganda poster print I bought out there). There are no adverts on the TV either.  It’s actually quite nice to get away from advertising for a while ! I took of picture of this bus stop in Pyongyang where instead of a poster for the latest mobile phone it’s an image of missile launchers used to shoot down planes.

5. The Shops All Look The Same

There aren’t really any shopfronts, merchandising or window displays. Most stores and restaurants will have some Korean writing above the door but it didn’t seem like there was much variation in the font or style. Nowhere seemed to have a logo or branding. You couldn’t always tell what a shop sold until you went inside.

There were male traffic wardens too but majority of the ones I saw were female and all of the women were very pretty! They had these great blue coats with fur collars and cuffs with a belt to show off their waist and knee high black boots. The men wore similar coats which I didn’t think looked quite as good on them! I have read articles online that claim Kim Jong Un chooses these traffic wardens for their beauty (because beauty if what you need when directing traffic). But I don’t know if it’s true or not. The photo below is from the Young Pioneer Tours Instagram page.

7. A Lot Of Attractive Women

We couldn’t help but notice that a lot of the staff at tourist spots were attractive, often relatively young women. Waitresses, local guides, museum staff- all very pretty. It made us wonder if only those considered to be ‘good looking’ get the jobs interacting with tourists. Maybe I am just thinking into it too much though?

Considering Pyongyang has a population of around 3 million there are not huge amounts of cars on the road. Most people travel by public transport or push bike.

..and they LOVE karaoke. People are taught to sing from a young age and singing karaoke is a popular form of entertainment but they take it much more seriously than we do in the UK. There are loads of songs about the leaders and how great they are. Whilst watching the propaganda channel one evening we saw the army singing in what looked like a huge choir and it sounded great ! Both of our tour guides could sing really well too. However, everyone sings in the same style- there are no rock bands or anything like that but a girl band called Moranbong are a little different as they throw in the odd bit of bass and electric guitar (watch a video of them here). You can also check out a short video I took of two of the restaurant staff in Pyongyang singing some Karaoke for us:

10. Nobody Knows How Old Kim Jong Un Is

They have not officially released Kim Jong Un’s birthday so none of the North Korean people know how old he is. I was surprised by this since they know all of this information about the two previous leaders and often base celebrations and monuments around their birthdays. This what Wikipedia says:

As I’ve already mentioned in my blog about my visit to  Wonsan Orphanage– triplets get “special” treatment in North Korea as Kim Il Sung once said that they are a sign of good prosperity.  When the mother is pregnant with triplets she gets extra care in a designated triplets room in the hospital. Once they’re born gifts are given to the parents- a ring for girls and a silver dagger for boys. The state helps care for the children (I’ve read that it’s til they are about 11 years old). It all seemed a little odd to us though- the triplets we met at the orphanage did have parents but it didn’t seem like they were able to visit very often. Something about it did not sit right.

12. Almost All of the Men Smoke

But it is frowned upon for a woman to smoke.

13. They do Know Some Western Music…but not a lot

How much western music a person knows may depend on what they studied at university. Those that have taken music courses will know a bit more western music than others. Judging my those we spoke to on the subject some popular western artists/songs are:

The Beatles: Hey Jude (probably the favourite from those we spoke to. Our guide loved it so much she listened to it on loop on my iPod for about an hour)

Michael Jackson: it was unclear exactly which songs were most popular but some people had heard of him. Our tour guide said his music was ‘too loud’ for her taste. So she can’t have heard many of his songs!

Abba: I Have a Dream, Dancing Queen

14. People are Terrible at Crossing the Road

They just walk out without looking. I saw a lot of people nearly get hit. I guess they have this in common with a lot of places in the world!

15.There’s No Internet. But the Study House has its own Intranet.

There are some very dated computers in the Grand People’s Study House in Pyongyang which has an intranet so people can search for information/books within the library.

Kimchi is a popular dish in DPRK (and South Korea too since it is a Korean dish). It’s usually served as a side dish with a meal. There are different varieties but the most popular is made from fermented cabbage. We had it with every meal – it’s not that bad but I found it a little too spicy. I was a pretty sick of it by the end of the trip. For more on kimchi see here.

17. Pyongyang has no Houses. Only apartments.

Some apartment buildings look plush and new but most of them look a little run down. People are given an unfurnished apartment for free by the government. What is unclear to me is who gets the good apartments and who gets the bad ones ? There definitely has to be a social hierarchy that determines who gets which. All of the professors at the university have a separate apartment block just for them and there’s also a newly built area that’s full of apartments for scientists.

18. The Countryside and Mountainous Areas are So Beautiful

I think some people may forget that North Korea has some great scenery and mountains as its not the first thing that springs to mind when you think of the country. But they really were beautiful, especially in the snow. My photos don’t really do it justice. 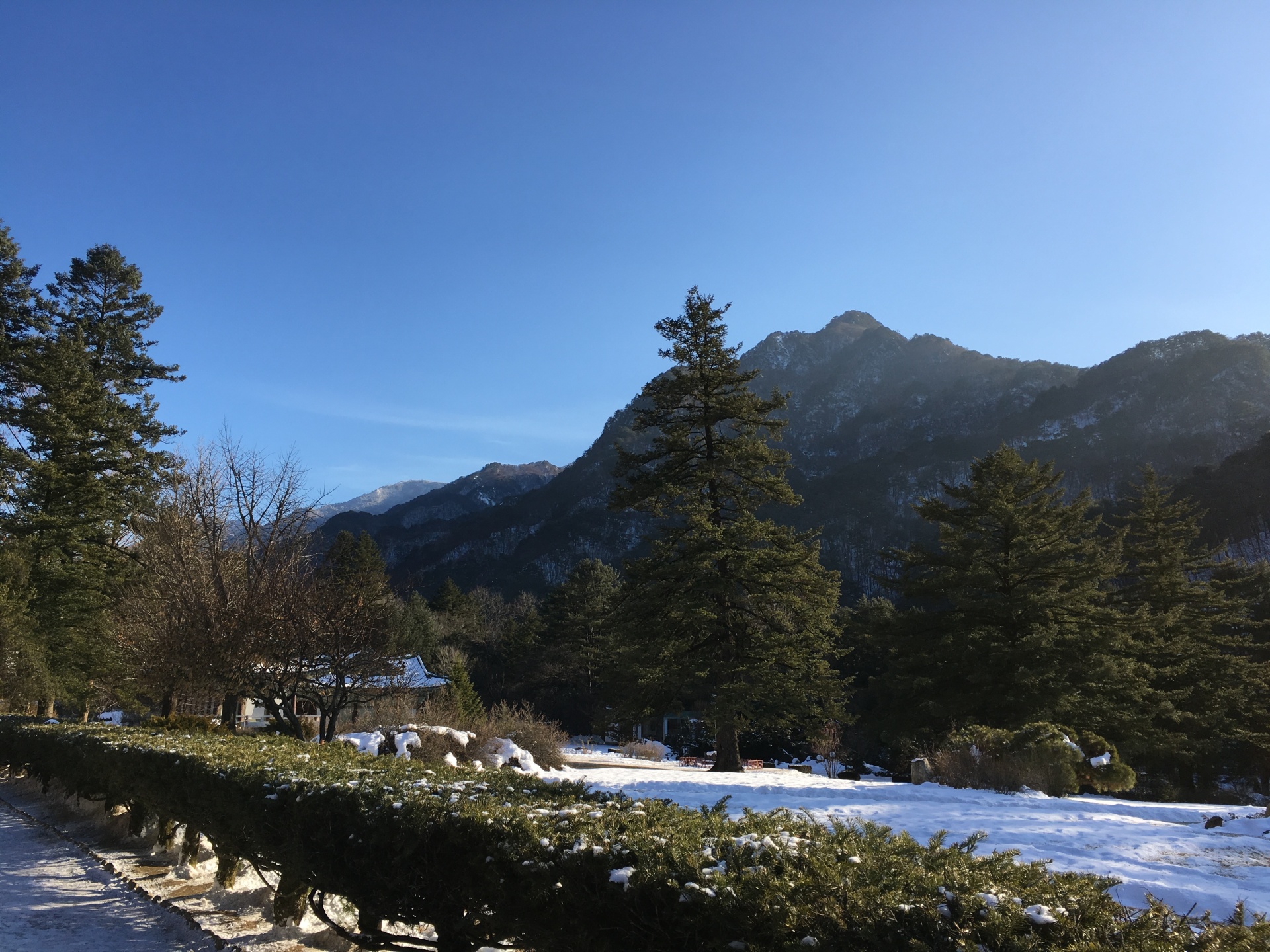 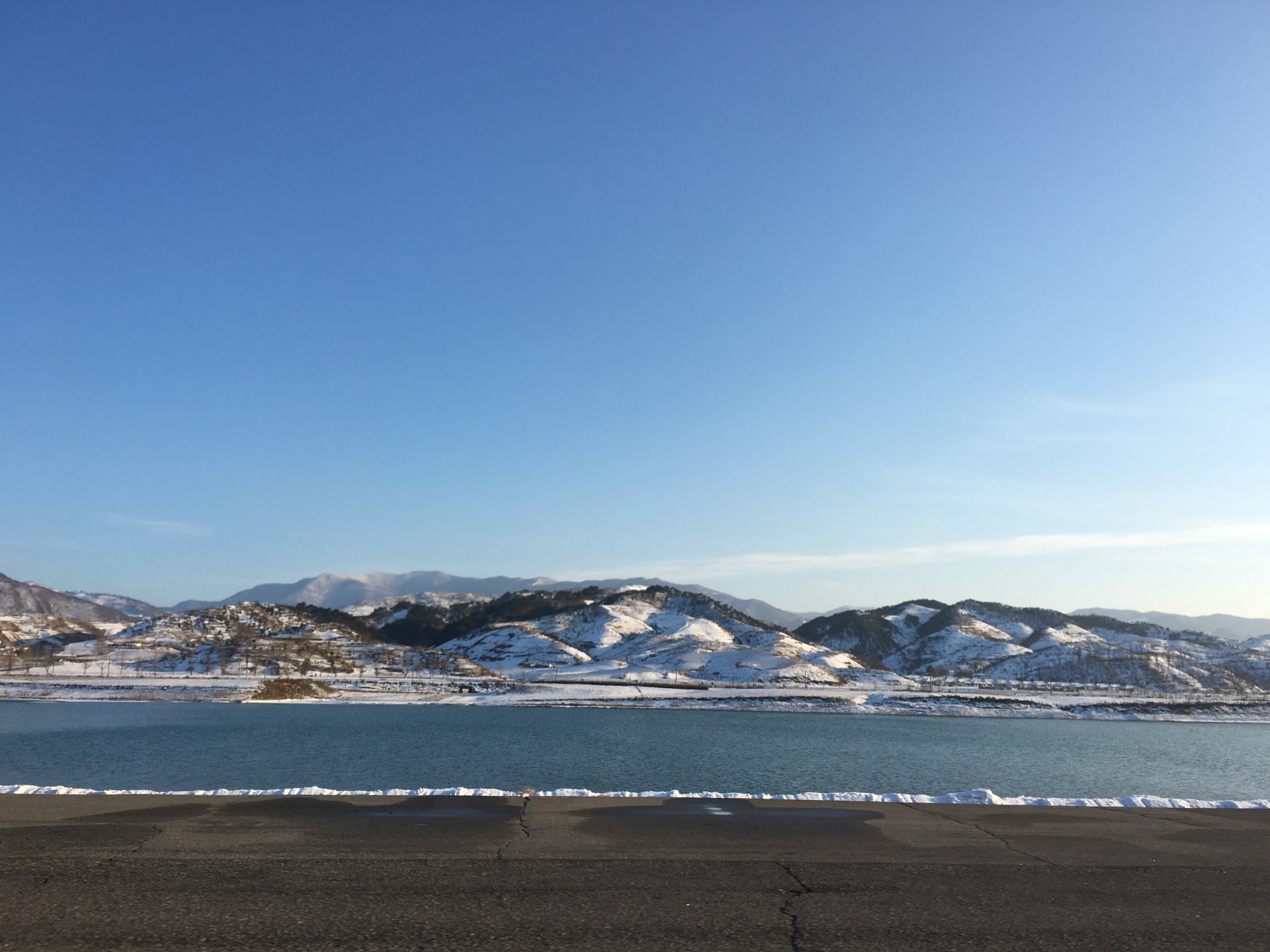 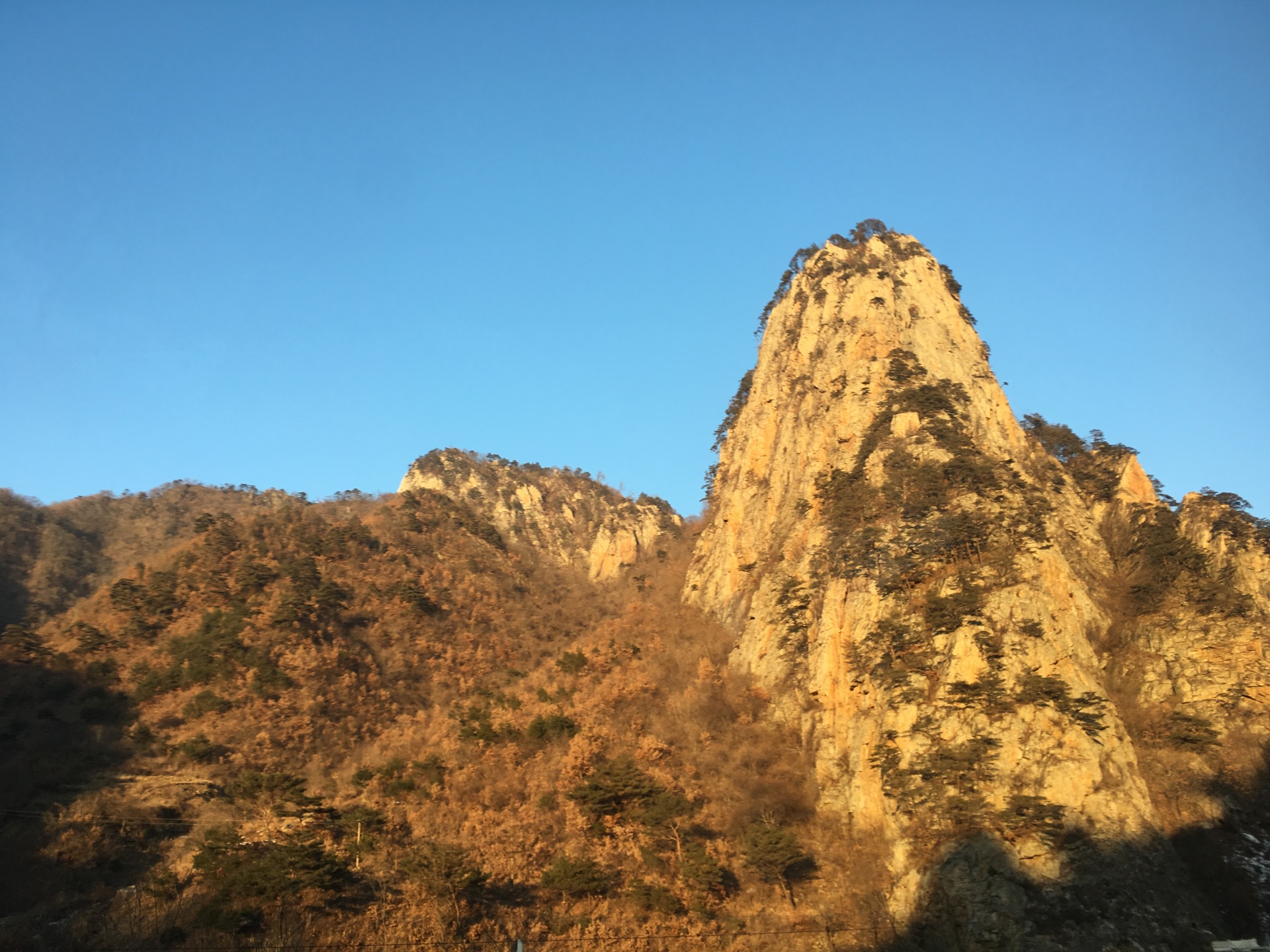 19. Kim Jong Il Has a Portrait of Himself Riding a Tiger

Whilst in Pyongyang we visited a gift exhibition where hundreds of gifts given to the leaders Kim Il Sung and Kim Jong Il were put on display. There we plenty of sculptures made from precious stones and gold as well as some random stuff like a TV and some golf clubs. But the best thing on display was a two sided portrait painting given to Kim Jong Il that depicted him in shiny armour riding a tiger on one side and stood in front of the tiger, unbuttoning his military uniform whilst smoking a cigarette on the other. Sadly, I couldn’t take photos inside the museum but after searching on Google I found that somebody had managed to obtain an image of one side of the portrait. So here it is.. 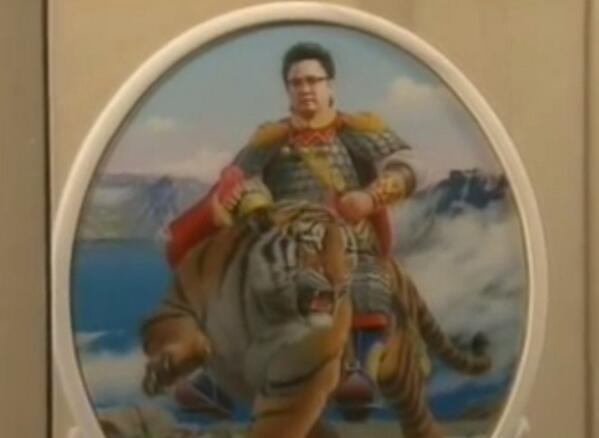 As you may have already gathered from some of the posts in my blog, the North Koreans aren’t too keen on the USA. This is something we are aware of already because of the media and obviously it all stems from the Korean War. But I didn’t realise the extent of the hatred until I visited the country. If you are an American tourist visiting DPRK they have a few separate rules for you – you have to fly in/out and cannot get the train. Despite this, American tourists are welcome and would not be treated differently by the guides. But if you break the law in DPRK and you are American then in this instance you could be punished harshly. The USA is the “enemy” to DPRK and this is clear from the propaganda posters, paintings in children’s schools (see here) and the exhibits at the war museum. I hope that one day there can be peace between the two countries but right now it seems a long way off.

See here for why I chose to travel to North Korea in the first place.

You could also have a read of my other posts on North Korea:

My Visit to Kamsusan Palace of the Sun

Getting the Train to North Korea

Getting North Korea stamp in your Passport

One thought on “20 Things I Noticed About North Korea” 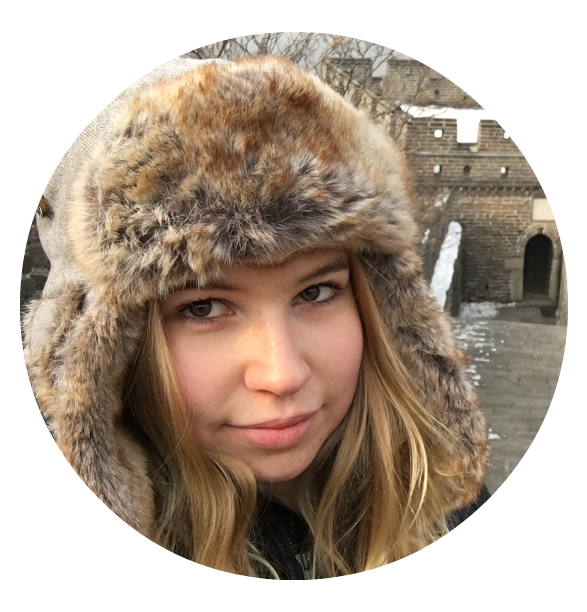 …a 25 year old Londoner who loves to travel. I want to inspire you to go on adventures, not just holidays! I visit places that make some people ask, ‘why there!?’ Well I’m here to explain why, detail my experiences and hopefully inform, entertain and inspire you!     Tell me more…